A Brief History of the French Bulldog 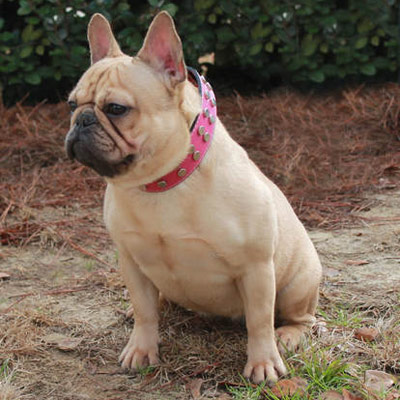 A Brief History of the French Bulldog

French Bulldogs haven’t always been those cute little pups with bat ears. They trace their roots back to ancient Greece, where their ancestors were massive labor and war dogs. From that breed descended the Bullenbeisser, a strong-jawed, athletic canine used for a fighting sport called bull-baiting. Bull-baiting is extinct, and so is the Bullenbeisser, but this breed paved the way for the modern Frenchie. Here’s a brief history of the French Bulldog.

Introduction of the English Bulldog

When bull-baiting was outlawed in 1835, some breeders crossbred Bullenbeissers with other breeds for heavier frames and exaggerated features. Others created smaller toy dogs distinguished by either their upright or rose ears and prominent underjaw. The English Bulldog was popular among the working class as family pets and companions.

The Bulldog Travels to France

The Industrial Revolution brought an influx of English immigrants and their pets to France, where the English bulldog became even more popular. Both the working class and elite became enamored and renamed them the Bouledogues Français. Breeders refined them to develop uniformity within the breed. This included a compact body, straight legs, and elimination of the extreme underjaw. The ears, however, remained as either pointed or rose, though the French preferred rose.

The Frenchie Moves to America

Americans traveling abroad fell in love with the bat-eared creatures and brought them home. They generated buzz at Westminster in 1896 but didn’t receive AKC approval until 1898. At the 1897 show, judges put up only the rose-eared variety, which infuriated Americans. This inspired the creation of the French Bull Dog Club of America (FBDCA), which drew up a breed standard that allowed only bat ears. But at the 1898 show, both varieties were to be shown. Angry again because the new breed standard only allowed for bat ears, Americans pulled their dogs and held their own show.

The popularity of Frenchies soared until World War I. By 1940, there were only 100 Frenchies registered with the AKC. In the 1950s, breeders sparked renewed interest by showing cream and fawn varieties, but still by 1960, only 106 were registered. A new generation of breeders helped the FBDCA gain steam in the 1980s, and more than 600 were registered by 1990. Today, it seems Frenchie puppies are in every neighborhood.

French Bulldogs have come a long way since their ancestors were war dogs in Greece! Today, they make wonderful family pets revered for their exotic colors, unique markings, and even temperaments. Lindor French Bulldogs is a licensed breeder of Frenchies, and we can help your family find a new pet. We have puppies, adult males, and adult females available for adoption. We provide a pedigree chart for every pup, so you can trace your own Frenchie’s history back three generations. Call us today at 904.574.7644 to learn about our available Frenchies!